A Culture of Caring and Justice

Dave Lehman, who was for many years the principal of Alternative Community School in Ithaca, New York (renamed Lehman Alternative Community School in Dave’s honor when he and his wife Judy, the school’s secretary, retired), joined us at Fall Forum 2016 to share his thoughts about the CES Common Principles in action, concluding a three-part keynote that also included remarks from Emily Garlock, a student at Steller Secondary School and Benadette Manning, a teacher at Fenway High School. We’re honored to share Dave’s remarks here. 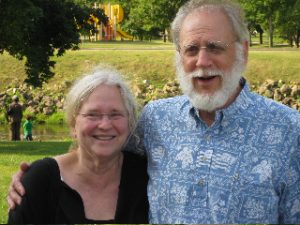 It began on a fall day early in the 1986-87 school year when our English and drama teacher brought in a short article from the front page of our local newspaper, The Ithaca Journal, and tacked in on a front hall bulletin board with a handwritten question next to it, which read something like, “How come this new organization of Ted Sizer’s, the Coalition of Essential Schools, gets all this notice for doing what we’ve been trying to do for years?!”

We were in our 15th year, having begun as a junior high—we added the high school component just ten years earlier—when we began the process to become a fully accredited, New York State Department of Education approved, high school, separate from Ithaca High School, under whose umbrella our diplomas were being granted. Then we began the application process that led the Alternative Community School (ACS) to become one of the first 50 schools to join the Coalition. The process involved an extensive application, which included a letter from me as Principal indicating why our joining the Coalition would benefit the school, and what we might be able to contribute, two additional, similar letters from ACS teachers, a letter from the Superintendent, and approval from the Ithaca School Board for us to apply.

Once we had formally become a member school of the Coalition, we worked at fully implementing the Common Principles. I’ll highlight three that are particularly meaningful to me. I begin with the first Common Principle of the Coalition which states, “The school should focus on helping young people learn to use their minds well,” that is, to be critical thinkers and problem solvers. I see this first Common Principle as more important, more essential today than ever as we engage in the new digital age with so much information so easily available on the Internet, Facebook, Twitter, Instagram, etc. Our teachers are working with our young people to help them become critical users of all these rapid-fire sources of information. They are using the excellent material developed by one of our social studies teachers at Ithaca College’s “Project Look Sharp,” including a set of “20 Key Questions to Ask When Analyzing Media Messages,” such as, “Who made this message? Why was this made? Is this fact, opinion, or something else? What are the sources of the information, ideas, or assertions?”

The sixth Coalition Common Principle states, “The diploma should be awarded upon a successful final demonstration of mastery for graduation: an Exhibition. At LACS we initially developed “Seven Essentials” and “Three Final Graduation Exhibitions” to answer our essential question: “How can you—a potential graduate—exhibit (or demonstrate) that you have the skills, knowledge and attitudes to be a global citizen in the 21st century?” As our current Principal, Diane Carruthers, said recently in her address to the graduating class of 2016, and their families, this past June, “If a school has a heart, ours is Essential #1, the skills for critical citizenship. It’s how we practice doing democracy.”

Here are the five things that our graduating seniors must demonstrate and explain to their graduating committee for Essential #1, titled “Participants and leaders in the community who”:

I will close with a third Common Principle that has been of particular importance to me. After more than a year of discussion, in 1997, the 100 members of the Coalition’s Governing Congress adopted the tenth Common Principle which reads “Democracy and Equity: The school should demonstrate non-discriminatory and inclusive policies, practices, and pedagogies. It should model democratic practices, and pedagogies. It should model democratic practices that involve all who are directly affected by the school. The school should honor diversity and build on the strength of its communities, deliberately and explicitly challenging all forms of inequity.” At LACS there now are no less than five student committees—that are actually led by students with a staff support person—devoted to implementing this tenth Common Principle:

I believe these seven are particularly relevant today, and could be useful for all Coalition schools. These structures and processes could help students and staff effectively deal with the hundreds of recent incidents of racist, sexist, homophobic, and xenophobic harassment and intimidation that Linda Darling Hammond referred to yesterday afternoon.

Knowing Ted and being part of this amazing school was such a privilege. Working collaboratively to build and sustain a vibrant community shaped all of our lives—mine, our students, our staff, and our parent/caregivers. For me personally, it strengthened principles in which I strongly believe, creating a culture of caring and justice.