Ron Wolk on Doc: The Story of Dennis Littky and His Fight for a Better School

Still Raising Hell: The Story of Dennis Littky Struggling Against the Status Quo

For more than three decades, we Americans have been engaged in a struggle for the minds and hearts of our children.

On one side are the traditionalists who built and support the one-size-fits-all “factory model” public education system with its authoritarian commitment to sorting students on the basis of standardized test scores.

On the other side, are the progressives, channeling John Dewey, who believe that education must be personal for each student who is encouraged to follow her or his interests, learn through hands-on and real world experiences, and demonstrate competence through real work.

No living person has been fighting the battle more diligently and persistently than Dennis Littky, a progressive innovator and disrupter of the status quo. Littky’s fiercest battle was fought in the 1980s in the small, rural town of Winchester, New Hampshire, where, as principal, he transformed the failing Thayer Junior-Senior High School into a place where every student could flourish.

The story of that battle made national headlines, was detailed in the book Doc: The Story of Dennis Littky and His Fight for a Better School by Susan Kammeraad-Campbell, and was later made into A Town Torn Apart, an NBC made-for-television movie. Because of his unorthodox methods, a conservative majority of the Winchester school board attacked Littky and eventually fired him. But Littky’s mantra is “never give up when you’re right.” He won the support of most of his students and parents as he successfully fought his adversaries, first in a courtroom and then in an school board election, which Campbell describes in nail-biting detail.

The last sentence of Doc describes the scene when the election results were counted: “In a deafening roar, the people gathered in the Thayer High School gymnasium that night proclaimed to the world that they had won.”

After 20 years as founder and editor of Education Week, Ron Wolk retired to Rhode Island to work on “something easy like health care or global warming.” But Ted Sizer recruited him to the board of Big Picture Learning, where Ron served as chairman next 12 years and an active board member thereafter, working with Big Picture co-founders Dennis Littky and Elliot Washor. 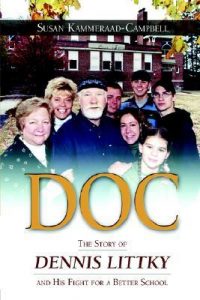