The Truth about Teaching and Learning

Benadette Manning, a math teacher at Fenway High School in Boston, joined us at Fall Forum 2016 to share examples of the power of the Common Principles, joining a three-part keynote that also included remarks from Emily Garlock, a student at Steller Secondary School and Dave Lehman, the long-serving and now retired principal of Lehman Alternative Community School in Ithaca, New York. We’re honored to share Benadette’s remarks here. 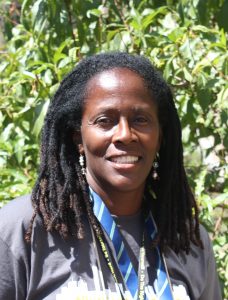 Good Morning, my name is Michelle Obama…just kidding—I just wanted to get your attention! Good morning, my real name is Benadette Manning. I have been a teacher at Fenway High School in Boston for 15 years. I am not here to talk about myself, my love of Fenway High School, nor my appreciation for the Coalition of Essential Schools.

Anthony Rhodes is currently a guidance counselor at Fenway High School. He is an impressive figure full of knowledge and a deep sense of pride in the school. He should—he was also a student at Fenway The Program when it was housed in English High School. He recalled with me the day that Larry Myatt, then headmaster, asked him what he planned to do after high school. Anthony had not thought about college at all. He said that back then, boys of color did not think about going to college. He went home and asked his mother what she thought he should do after college and she quickly replied, “ Get a job and help me pay bills.” Right then, Anthony knew he had to go to college and he did.

After graduating, he returned home to Boston and started working at Fenway High School as one of the three student support counselors. He counsels students throughout the day when they just cannot handle school or their home life, leads advisory classes, and mediates difficult situations between teachers and students. Everyday Anthony Rhodes uses the CES Principle Personalization. 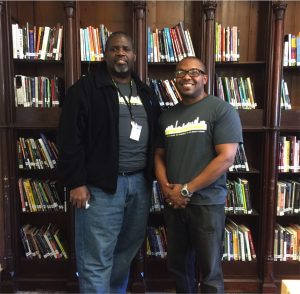 Byron Winder, an honor roll student with a warm friendly smile, was in the ninth grade at an exam school in Boston when he got seriously hurt playing basketball. His injury was so extensive that he had to stay out of school for a month or two while he healed. His teachers had no interest in helping him and quickly stated that he would fail the year and have to repeat the ninth grade. Byron was devastated. Failure was not something that he had ever experienced. He knew that these teachers did not care about his situation, as they never once asked how he was feeling when he returned to school, but he did not know that they would not do one thing to help him. At one point he was told by one of the teachers at the exam school that he was “not capable of doing math this level.” A stroke of luck landed him in the office of English High School and a meeting with Larry Myatt. Byron remembers Larry’s outgoing smile and personality inviting him to check out the school to see if would like it. And Byron did. Byron went on to become one of the three top students in English High School. He graduated and a few years later would become a math teacher at the school. Byron’s three children have also attended Fenway. While this is a great story, Byron talks most passionately how the tone of the school made his mother feel respected and it made him feel wanted and cared for.

Byron spent 13 years at Fenway as house coordinator. This is not an easy task, as he had to organize house events, talk to students when they struggled, and communicate with parents. Byron knew every family he served and they knew him. It was as if he was showing them the same decency that he had been shown his first day at Fenway High School.

A young Kerwin Corneilius, now on staff at Fenway, remembers talking to his friends who attended other schools in Boston, about their day at school. While their days had been filled with foolish antics such as going to school drunk, Kerwin was taking a Ventures class. The Ventures class teaches all students how to start a business, from an idea to a business plan. Students then have to present their business idea to professionals at a major health care company. As if this were not enough, students had to find and attend a 10-week full-time internship as a graduation requirement. Students are required to present their experiences to ninth, tenth, and 11th graders at the end. Kerwin states,” By the time, I got to college, I knew more than other students because of my Ventures class. After Fenway, Kerwin attended college where he graduated with a degree in business. While Kerwin is thinking about what the next step will be, he interacts with students daily as a paraprofessional. He helps his students see the bigger picture beyond Fenway since he understands while his underlying goal is to be involved in business; he realizes that he likes teaching! He says that he loves the response from students when they learn. 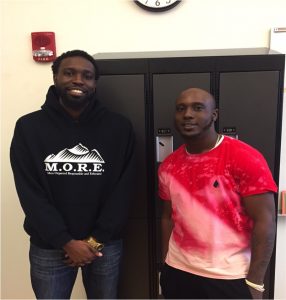 Carlos Lowery, then and now tall and lanky, and now a special education paraprofessional, remembers as a student how special it was to do Spanish exhibitions, yearly math exhibitions, and Senior Science fair. At these demonstrations he learned how to be a public speaker.

Carlos attended college and after graduation, while looking for a job, reconnected with Fenway by volunteering. Lucky for us, he decided to stay. He is now studying to be a math teacher as well as the co-director of the debate team. As a staff member in the building, Carlos knows the students more than they know themselves as he is from the same neighborhoods and at one time had the same mindset that they have. His students know that he is non judgmental and that he understands them. They know he is genuine and with that knowledge, they allow him to share his experiences with them. 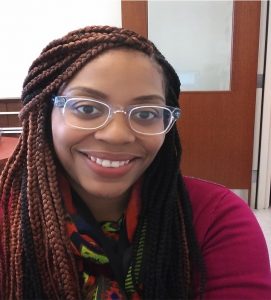 Gabriel Jean Jaques says Fenway was the first public school she attended. She was told that Fenway was a “good school” and was excited to attend. She remembers the unconditional support that she received as well as being prepared for higher education where she majored in education. She returned to Fenway where she served as a Humanities teacher.

Gabriel now serves as the Ventures program coordinator. In that role, she plans the junior/senior career fair for 160 students that is attended by well over 200 career professionals. She also teaches Ventures classes to seniors.

Whenever I need to get clear my head about all requirements from the state and the city as well as the well-meaning suggestions from books, websites, professional development, and well as my own endless goal setting, I read the Common Principles to realign as well as re-energize about what the truth should be about teaching and learning. The principles give me the strength and courage that I need to know that I can do this most important calling. Day after day, they help me be the brave person that I know that I must be. I can then call that difficult parent or talk students about what “student as worker means” or make sure that I have a vital one-on-one conversation with an advisee.

Allow me to be a little hopeful here…I am a dreamer. Wouldn’t it be amazing if these Fenway stories were common? That all schools know and use the Common Principles to guide them through the national and state policies that don’t always see things the way we do. That “student as worker” would be a common phrase for all students. That “personalization” would be in every classroom. That “a tone of decency and trust” would a common goal for students, teachers, and administrators. That students would be so moved that they wanted to be teachers and administrators and paraprofessionals themselves is a wonderful testimony to the power of the Common Principles. They would be so moved by the tone that they wanted their own children to attend CES schools.

Though this is the last Fall Forum, we have not seen our last student. Through our students the principles will live on. We will continue to use these principles to guide us, lift us up, and sustain the good work for years and years to come.