Larry Myatt on Horace’s Compromise: The Dilemma of the American High School

Books about schools and education very seldom become blockbusters. It can be said that Theodore Sizer’s Horace’s Compromise was a notable and important exception. Horace’s Compromise resonated with such a broad audience, and for such a variety of reasons, that it is rightfully considered by many to be THE educational treatise of its time.

Coming on the heels of “A Nation at Risk,” the persona of Horace Smith—dedicated, thoughtful, and overworked—emerged from Sizer’s connoisseurial study of high schools, capturing the attention of a waiting audience of teachers, administrators, policy makers, and philanthropists. Ted’s critical insights into and framing of irreconcilable classroom dilemmas distinguished Horace’s Compromise from a number of other excellent contemporary books about the American high school also attracting a national audience.

As a new administrator in charge of Boston’s Fenway High School, designed to serve students who weren’t succeeding in traditional settings, Ted’s penetration of the rituals and routines of school, the challenges of students’ differences and complexities, the repeated attempts to find an elusive “middle” to teach to—or at—and the inadequacies of our high school’s “architecture” affirmed my instincts. Kids were not the problem. Nor were the teachers. I was grateful. Finally, someone had made brilliant sense of what I was experiencing. Ted made it crystal clear that we, each of us, in every kind of high school, were being asked to implement a system designed for another time, destined for mediocre outcomes, and sorely out of touch with the needs of its inhabitants.

Everyone around me, it seemed, was reading and talking about the book: our superintendent in Boston, key district personnel, thoughtful teachers, university partners. Our reading group based on Horace went a long way to help us create a school that would work for our students, as well as for us. The principles that Sizer derived from his study—intimacy among teacher and learners, decision-making close to the classroom by those who know the issues, a focus on using the mind well, an ethos of challenge with equal support—resonated with readers and further propelled the book into teachers’ rooms, university classes, and on to the reading lists of decision-makers.

Looking back, it was the beginning of a Golden Decade for educators, a time of exploration, of trust and hope that we could do better in schools. Ted’s pedigree and standing added luster to his subsequent efforts to create a network of schools, the Coalition of Essential Schools, that would follow the emerging strategies culled from his analysis and big ideas. We were eager to join, and did, for a great run in what now, looking back, seems a heyday of progressive education.

Horace’s Compromise retains its power to draw the reader into Horace’s world all these years later. I re-read sections of it each summer, hearing Ted’s voice, urging us to listen closely to the voices of young people and those who are asked to teach them, and to do better.

Deeply engaged in education leadership development and school redesign and renewal for over three decades, Dr. Larry Myatt is the Headmaster Emeritus of Fenway High School in Boston and current president of Education Resources Consortium. 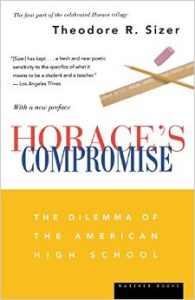