CES Essentials: The Power of Their Ideas

Ayla Gavins on The Power of Their Ideas: Lessons for America from a Small School in Harlem

In 1996 I got a phone call from a friend that was a student of Deborah Meier’s at Harvard University. She told me about a new school Deborah was opening in Boston that sounded perfect for me as a teacher. At that time I’d never heard of Deborah or progressive education. I called Deborah at her home to introduce myself. Before I knew it she was observing in my classroom. Then she broke the hard news to me that I wasn’t right for the teaching position. I asked myself, Who is this woman? What was she looking for? And what do I have to learn from this experience?

That’s when I read The Power of Their Ideas. The book changed my life and set me on a course to better understand myself, to see what a school could look and feel like if the intellect and curiosity of students and teachers were respected, fostered and protected. I was taken by her descriptions of student work. I had never seen or experienced such respect for the natural development of children and teacher voices. Her description of Central Park East read like a dream, but it was real. After reading the book, I would never be the same thinker or educator again.

I love this particular passage:

Maybe mutual respect is what we’re all looking for – which means feeling sure the other person acknowledges us, sees us for who we are—as their equal value and importance. When there’s enough respect, perhaps we’re able to give up tight control over our youngsters, and give them more space to make their own decisions, including their own mistakes. What strikes me forcefully is how much adults and kids long for the same things.

Ayla Gavins is the principal of the Mission Hill School, a K-8 public school in Boston’s Mission Hill district. She was one of the staff members selected for Mission Hill School and became its principal in 2006, succeeding founding principal Deborah Meier. Originally from a small town near the Pittsburgh area, Ayla began her education career in the Wayland (MA) Public Schools system, moving on to teach in Newton and then in Boston. 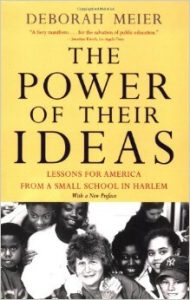