It’s our last year as a national office, our last year with a Fall Forum, but we know there’s much more to do. What will happen to our Common Principles? Which ones should we continue to support especially strongly?

Now I will confess it: my favorite of the ten Common Principles is Demonstration of Mastery – the exhibition one.

Teaching and learning should be documented and assessed with tools based on student performance of real tasks. Multiple forms of evidence, ranging from ongoing observation of the learner to completion of specific projects, should be used to better understand the learner’s strengths and needs, and to plan for further assistance. Students should have opportunities to exhibit their expertise before family and community. The diploma should be awarded upon a successful final demonstration of mastery before graduation – an “Exhibition.” As the diploma is awarded when earned, the school’s program proceeds with no strict age grading and with no system of credits earned by time spent in class. The emphasis is on the students’ demonstration that they can do important things.

I like this principle because it seems to contain within it many of the others. It emphasizes depth, engagement, appropriate goals for each student, personalization and student initiative. It is student-as-worker, teacher-as-coach. Not explicitly stated in the Common Principles, but evident in the Exhibitions which I have seen, is a moral as well as intellectual purpose behind a piece of hard work. It is showing off, in the best sense, and rewarding the journey toward the “important things” which will confront adults.

And I like it because I was by Ted’s side in 1972 when he learned that at Phillips Academy, where he had just become headmaster, there was a nearly two hundred-year history of celebrating student work. The Commencement itself is still called an “Exhibition,” though it no longer includes a recitation in Greek. What excited Ted was not just the dynamic description of what valued adults felt about their students’ progress, but the opportunity for further growth. Seizing the word, and the essential meaning behind it, Ted re-introduced the exhibition as a challenging but also inspiring form of measurement for teenagers. He and the others who worked at CES wrote and spoke, defined and redefined, conceived of models, and learned of many other versions of exhibitions at Fall Forums and elsewhere.

The idea has definitely taken hold, even in the schools which have never heard of CES or Ted. In the last five years, as I have been coaching new teachers in different urban school systems, I have heard the word constantly. Usually it has implied some sort of individual project, perfected enough to show to others. I have seen imagination, energy, hard work, and results which can be assessed by teachers and parents, adults and other students. Some have been inspirational to others; all have been important to the “exhibitors.” Not always at first, but in time, even disappointing results have become educational. There’s not the crumpling up and moving away from something that “doesn’t matter” that we see too often.

Recently I watched the film “Most Likely to Succeed,” which makes exactly this point in an extensive look at the Exhibition process. In the film, it’s younger students who are demonstrating their work, not graduates, but it’s clearly part of a crucial process. The teachers at High Tech High in San Diego describe the skills which are learned, such as how to make a decision, how to handle difficulty, how to collaborate with others. These are not qualities which are encouraged in most high schools – they seem to favor individualists who are both competitive and compliant – yet we all know that those are the skills needed in the adult world. In documentary form, we meet compelling students and their teachers and parents as they prepare for more than college admission with its homogeneity and rote-learning. We see kids practicing adult life – real life – helped by demanding but loving guides.

Ted would have loved it. It is a Common Principle come to life, and like so many other projects these days, it extends his dream.

It is the work that we at the Coalition and our like-minded fellow progressives have done for many years, and that we need to continue to do. The nation seems to be slightly recovering from the recent testing binge and looking for better ways to assess student work. This makes our message more vital than ever. We must continue to find ways to spread it. 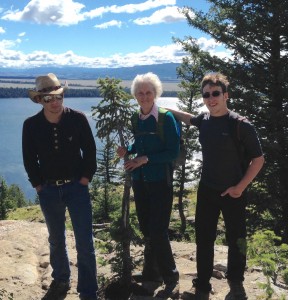 Nancy Faust Sizer, pictured here with grandsons Ryland and Grayson Cullen, taught high school history for 25 years. She then served as a co-teacher and coach at the Harvard Graduate School of Education. Nancy co-authored The Students Are Watching: Schools and the Moral Contract with Ted Sizer, and she wrote Crossing the Stage: Redesigning Senior Year. Also with Ted, Nancy was also the acting co-principal at the Parker Charter Essential School in Devens, MA. She is currently teaching a course on school reform at the Harvard Institute for Learning in Retirement.