On behalf of the CES Executive Board, I would like to welcome you to the CES Fall Forum. As CES founder Ted Sizer always called this, our gathering is again a conversation among friends.

Throughout its history, CES has been the center of progressive, student-centered and teacher-directed innovation in education. Terms that today seem commonplace in the best schools, such as advisory, block scheduling, and performance-based assessment describe practices that arose from the pioneering leadership of CES educators. The CES Common Principles have guided the work of the Coalition and their influence can been seen in classrooms that provide young people with the best our schools have to offer.

This will be the last CES Fall Forum, as the Board has decided to close the national office after our gathering in Providence. It is fitting that this grand adventure comes to an end in the city where it was first launched by Sizer and his colleagues at Brown University. Ted’s vision was that like-minded educators would share their best work around the Common Principles to direct school change that would lead to every student being engaged in learning to use her/his mind well. At that we have been successful.

Ted also believed that the ideas and innovations of CES should not be trademarked, packaged, or sold as a one-size-fits all plan. Rather, the ideas and practices that arise from educators working with the ten Common Principles were to be freely shared, refined, and shared again. CES was not to become a brand or a limited-admission club. And while many of us chafed at Ted’s insistence that all comers be welcomed to CES no matter where they were on the road to reform, in the end it was just another display of his wisdom. That is because CES never claimed to have the answer, recipe, or formula for school that held high standards for all students in an active and personalized environment. No, it was to be a conversation about how to support teachers and administrators in evolving and creating schools that were equitable, just, and demanding in the preparation of young people for the highest calling, that of democratic citizen.

Now, after years of vibrant leadership, we have come to a time where others can best carry on this conversation. Regional networks of schools and educators have sprung up from CES. Educators who have cut their eyeteeth in CES work have launched new networks, organizations, and schools. Because there are new ways of educators carrying on this conversation, we gladly cede the role of convener of such conversations to them.

But CES will not end. How could it, when the practices and policies of so many schools owe their genesis to CES? When so many teachers and administrators have had their lives transformed through engaging with CES? And when so many students have learned what it means to use their minds well in the cause of a just and equitable world?

At this Fall Forum, we feature the past of CES, the current practices of CES schools, and the ways in which your future can continue to be impacted by those organizations that have been seeded and have flourished by CES. You will also hear about how CES will live on through an electronic presence where you will always be able to obtain resources, connections, and inspiration. We are glad you are here to once again join in the conversation—a conversation that will be as important to our schools tomorrow as it is today. 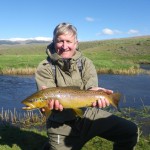 George Wood is the Superintendent of the Federal Hocking Local Schools, a rural school district that serves the Stewart, Ohio region. George is the chair of the Coalition of Essential Schools executive board and author of several books, including Time to Learn: How to Create High Schools That Serve All Students.

George notes that the fish in the accompanying photo returned to its waters moments after this photo was taken.