Connections that Matter and Endure 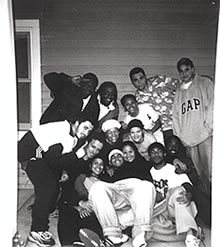 Recently, my former student Jaelis Toro called to see if I had Elmer Myer’s new telephone number. Elmer had been her advisor a few years ago at Arturo Schomburg Satellite Academy, a small alternative school in the South Bronx, when I was the director of the school. Jaelis—now a junior at Bethune Cookman, a small, Southern, historically Black college—called because she missed her advisor. “I just want to let him know what I’m up to and I want to congratulate him and find out if he likes his new job,” she said. I wasn’t surprised that Jaelis was still so connected to Elmer, who was now running a teacher training program elsewhere. Elmer was the kind of advisor who celebrated every birthday with a special ritual. At the end of every year he held a barbeque at his home for all the graduates in his advisory. He really understood the meaning of advisory. He took it on and he grew from it. He became a better teacher through the experience and most importantly, he made students feel special and celebrated, so much so that Jaelis wanted to check in not just to tell Elmer what was going on in her life, but to give back to him by celebrating him for his new job.

Jaelis’s call wasn’t uncommon. During my years at the school and even after I moved on, former students called or emailed trying to track down their advisors. And on one occasion when I was interested in locating a former colleague, I emailed a student who I was sure knew how to find him—he had been his advisor and they were still close. In fact, students regularly came home from college and rushed to see their advisors, excited about sharing every detail about their new school. Former students also returned to the school to mentor a new advisee, coming to orientation to talk about the dos and don’ts of advisory to all the incoming students.

The bonding experience that took place in advisory created ties between students and adults that were not easily severed. For some students, it was the first time they trusted an adult outside of their family long enough to build a relationship. The role of advisor offered teachers and their students a new way to interact and relate to one another, providing them with the liberty to get to know each other without the constraints of the academic curriculum. In advisory, the students were the content to be studied and explored. Students sat in a circle and talked about life and school. They shared themselves and revealed their flaws, analyzing what it meant to be this or that kind of student. It was there that they first established their commitment to themselves as learners and to the school as a place where they chose to learn.

Through the years, students continue to reach out to the caring adults with whom they spent five to ten hours a week throughout high school. Spotting Norman, a former student, in the 3rd Avenue shopping district in the Bronx, I asked him if he’d gone back and seen Beverly, his advisor. “No,” he confessed, “But I call her and she stays in my heart.” And the feeling is mutual. Last year, at an outdoor concert in Sonoma County, California, I ran into a former colleague from New York City. It was the most serendipitous event: out of nowhere, there was Kelson Maynard with a huge smile. “Girl, California can’t be as big as they say,” he said in his West Indian twang. We immediately embraced and after some quick catching up on work and family, he began speaking of his former advisees and sharing “the stories of their lives.” I listened attentively to his animated, sad and hope-filled tales of his advisees: who was in college, who got pregnant, who came back to the school to speak to his new advisory, and who hadn’t returned.

Kelson, Elmer, and Beverly will never be the same again because Jaelis, Norman, and all of the other advisees came into their lives and touched their hearts so deeply that they have been changed forever. “Teaching is different from being an advisor” shared Laura Thompson, my colleague and long-time friend. “You think you know what to do as a teacher in most situations, but as an advisor you are truly learning yourself all over again, and the children are your witness as you are theirs. And if you do it right, both of you are transformed for the better.”

The role of the advisor and the mission of advisory is practical and honorable at the same time, made up of mundane and magical moments that are carefully crafted to guide young people through one of the hardest transitions of their lives. Advisors teach life skills while they nurture young people through the growing pains of becoming young adults. The advisory becomes the family, and sometimes the advisor becomes the surrogate parent. At its best, advisory is the place where young people learn to feel interconnected, interdependent, and accountable to and for each other. At these times, advisory almost runs itself. The leader learns to be a member of the group while she fosters the leadership of each of the students.

When done right, advisory is the heartbeat of the school, the energy center of resilience, equity, and love, nurturing and sustaining a healthy school culture that validates and affirms each and every member, young and old. Advisory is the place where you can be yourself even as you explore your new and emerging selves. Finding your voice means learning from the other advisees how to speak up for yourself when a teacher isn’t exactly being fair. It means practicing how to tell your mom that you couldn’t miss school anymore to take care of your little sister. Advisory is the place where you share your fears and explore your passions in the company of people who know and care about you. They cheer you on and challenge you to do better and not give up. Magical things do happen when a young person feels that they are heard, respected, and belong.

I wasn’t always a good advisor, but one thing I figured out very quickly was how important it was to let absent students know that they were missed. Our advisory’s ritual: I would create a chair circle for the number of advisees that should be in attendance and then I’d slowly eliminate the chairs of those who were not present, only after asking about their whereabouts. It meant so much to the students to be known by their name and to be missed that it made them want to come to school. I never had perfect attendance, but students were fully present, engaged and working hard to change old habits.

At Schomburg, we carved out a space for advisory that allowed for all of us, teachers and students, to give, receive, and create. Advisory was the glue that held us all together. It gave us a platform to speak our truths on our own terms and a resting place to cry and seek out new answers to what ailed us as individuals and as a community.

When I was an advisor, my advisees asked, “How come so many students keep coming back to the school after they graduated? Don’t they have a life?” The answer came from one of my first advisees. She told us the story about how at some point we each plant a tiny golden strand into each other’s hearts that no one can see, and that is what keeps us together. Even after we are no longer in that classroom, all together striving to figure things out in happiness and in sadness, we are still connected. And when we don’t see each other, we feel a reminding tug. This young wise person had figured out that we had become entangled in each other lives and dreams, and that there was little we could do but accept and enjoy it.

Advisories in Essential Schools: This issue explores the state of advisories in Essential schools. What do graduates think of an advisory centered high school education. Contributors explore how students' experiences have been shaped by advisories, present research that validates advisories' beneficial effects, and also look at how Esssential school educators are conducting their own data-based inquires to demonstrate the effectiveness of advisory programs. Download PDF