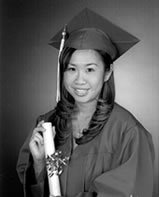 Anna Le, a graduate of Life Academy, actively participated on the school’s design team during its transition to an autonomous small school. In conversation with Laura Flaxman, Le shares her insights about small school design from the student perspective.

Laura Flaxman: What should students be aware of when they’re moving from a large high school to a small one?

Anna Le: Students have to be very open—minded and willing to take risks. They have to understand that if you want a good future, if you want to go to college, you’re going to have to make sacrifices, like maybe not seeing friends that you would hang out with at lunch time. Some students who came to Life in the beginning switched back to Fremont. I think it was because people would just get on their nerves. Everybody’s so close. Some of them didn’t feel like they had any privacy or, at the same time, any close friends. If you can’t make friends with these people, then you’re stuck at this school.

One of my friends wanted to leave, but I said, “Girl, you might as well just stick with it. You’re halfway through the school year. And if you go back to Fremont, you’ll probably end up being stuck with a teacher that you don’t even like or you don’t even know. But if you stay here, you can have these teachers that already know you and help to get you where you need to go.” So she stayed. And a lot of other students stayed because I did some talking and made some more friendships.

What’s different between Fremont and Life is that the school got smaller, way smaller. And you would have fifteen to seventeen kids in a classroom, which makes it easier to do role—plays and to assign projects like in Mr. Lee’s class, where we did the Jerry Springer shows and the Greek mythology plays. That was fun. I think that the school size was why we decided we wanted to stay at Life. It’s better for us and it’s going to be better to get us in college.

LF: If you were talking to adults who were planning to restructure a school, what would you want to tell them that the role of students should be?

AL: I think that teachers should be more open—minded and supportive. You’re told that you should go to the big high school and graduate, but most of the teachers in the school don’t really care about you. They just pass you just to let you go on. And then by the time you graduate from high school, you don’t even know how to do algebra. I mean, that happens. At Life, all the teachers know all the students. They could name you, versus if you’re in Fremont it’s more like, “Hey, you.” So the teachers know your name and they can talk to you individually if you were failing or behind.

I would say that young adults know what works best for them in terms of education. I learn better visually than from textbooks. So teachers should talk to the students about what works for them in terms of education and what will help the material stay in their minds. And students have creative ideas of how to make the whole lesson fun. And if it’s fun, it’s going to stay in their minds. They’ll say, “Oh, I remember this part in high school??”we did this.” It’s going to help.

Kids have energy. They’re willing sometimes to go overboard for something because their belief is so strong. So it’s better to use their energy, especially if you go to meetings. At the board meetings it’s best to have students??”they hold up the signs and shout and cheer.

LF: So what did you gain by being on the Life design team?

AL: People always say that education always comes first, but I learned that was just B.S. Because if you look at the government, they don’t care. When the budget gets cut on education, they should have to do the same for jail cells. I think that’s what the biggest thing I learned, how America can be so ironic sometimes and at the same time can be completely racist, how the white kids get mostly the good stuff and what we get is our grandfather’s books.

I learned a lot about how the school system is being run. At one point I actually wanted to be like you, to make changes in school or either become a teacher, a counselor in school, or a person in the government that deals with school stuff, like a school board member. And I learned how to be outspoken, how to get my thoughts across.